"This is a brilliant book - a wonderfully entertaining history of molecular biology and the surprises and controversies of a field still very much in flux, from early explorations to the emerging realisation that the human genome may be far more sophisticated than we ever imagined." - John Mattick, Director, Garvan Institute of Medical Research

"Overall, this is a faithful, engaging portrait of the twenty-first-century genome" (full review) - Nature,  Nathaniel Comfort

"The Deeper Genome … provides an elegant, accessible account of the profound and unexpected complexities of the human genome, and shows how many ideas developed in the 20th century are being overturned" (full review)- New Scientist,  Claire Ainsworth

"A compelling book that will enrich your knowledge of genetics and its potential"  (full review) - New York Journal of Books,  Anne Parfitt-Rogers

"The scholarship he displays in putting all these new developments together, and his narrative skill in connecting the genome and the “neurome”, are among the reasons I could not put this book down. I have placed The Deeper Genome on our first-year biology undergraduates’ reading list. It’s a game-changer and a masterpiece for anyone interested in biology"  (full review)- Times Higher Education, Charalambos P. Kyriacou

"We highly recommend the book as a supplement for classroom teaching as it covers fundamental concepts in an easily readable format. Students will likely find it even more interesting than many of the more standard textbooks. ... The Deeper Genome is a great read that definitely imparts knowledge in an entertaining fashion and connects the almost 99 percent of the genome that is not protein coding to all sorts of interesting questions. We highly recommend it"  (full review)- Cell, D. Greenbaum & M. Gerstein

Over a decade ago, as the Human Genome Project completed its mapping of the entire human genome, hopes ran high that we would rapidly be able to use our knowledge of human genes to tackle many inherited diseases, and understand what makes us unique among animals. But things didn't turn out that way. For a start, we turned out to have far fewer genes than originally thought - just over 20,000, the same sort of number as a fruit fly or worm. What's more, the proportion of DNA consisting of genes coding for proteins was a mere 2%. So, was the rest of the genome accumulated 'junk'? Things have changed since those early heady days of the Human Genome Project. But the emerging picture is if anything far more exciting. 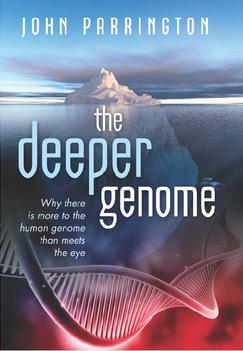 In this book, John explains the key features that are coming to light - some, such as the results of the international ENCODE programme, still much debated and controversial in their scope. John gives an outline of the deeper genome, involving layers of regulatory elements controlling and coordinating the switching on and off of genes; the impact of its 3D geometry; the discovery of a variety of new RNAs playing critical roles; the epigenetic changes influenced by the environment and life experiences that can be passed on to the next generation; and the clues coming out of comparisons with the genomes of Neanderthals as well as that of chimps about the development of our species.

We are learning more about ourselves, and about the genetic aspects of many diseases. But in its complexity, flexibility, and ability to respond to environmental cues, the human genome is proving to be far more subtle than we ever imagined.